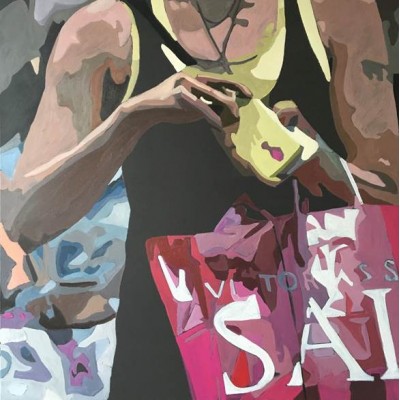 Cube Gallery, hosts the new work of the artist Christos Koutsoukis in his solo exhibition entitled “flux”. This is his third solo show, with paintings, hosted in Cube, afterwards his two solo shows “Moments”, 2012 and “Let’s play”, 2016.
Christos Koutsoukis writes about “flux”: "In modern countries, with large populations of many millions of people clustered and packed in cities, urban landscape - while it expands to serve capitalist needs, at the same time reveals a strong feature of an uninterrupted movement of people, creating pictures with special visual interest. Human figures, with different starting points, cross the same point at the same time, creating an unceasing flow. This perpetual flow as an image, emphasizing on details, is a source of inspiration for these paintings. Through this intense urban centralization, we observe human forms that convey to us the sense of today's urban reality, and the fatalities of what is happening in it, such as intense movement, anxiety, loneliness or even isolation. These images, either as personal capture of the mobile camera or as a research product from the internet, constitute a point of reference for the painting compositions of this section, called "flux". This approach attempts to highlight the lack of communication between people in large urban centres, despite the fact that all of this often happens a stone’s throw from each other. Is it an involuntary alienation or a conscious choice? It is definitely a response to the modern communication model that has been adopted and imposed upon us within this explosive economic growth, particularly that of the large economies of the rich countries. "

Christos Koutsoukis studied painting at the Athens School of Fine Arts. He has presented eight solo shows and has participated in many group exhibitions and art projects in Greece and abroad. He lives and works in Brussels.

Coming back from school