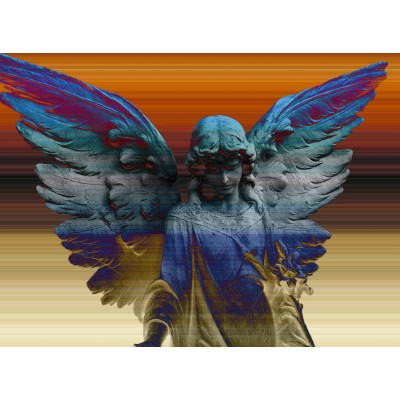 Cube Gallery, for the month of November, hosts the new work of the artist Constantinos Patsis, in his solo exhibition entitled “Paradise Lost – Lost Paradise”.

Nikos Vatopoulos, journalist, writer and co-curator of the exhibition, writes about the Lost Paradise of Constantinos Patsis, under the title “A Treaty of Freedom”:

Among the shadows of a memory which is sometimes latent, while other times asserts its rights, Constantinos Patsis advances with a sui generis autobiographical attitude in the mapping of a treaty.

This pact seems to be dictated by memory, but is mostly pushed by an onward motion. For Constanstinos Patsis, the palimpsest of his journey so far contains all that fractal load of a long process to reach adulthood.

His artworks, at the “Paradise Lost” exhibition, which are currently displayed in Patras, in Liana Zoza’s beehive of contemporary art, Cube Gallery, depict strength and tenderness, a deeply introspective and personal distillation. By spreading a vast landscape studded with autobiographical references, scouring meadows of reminiscence and clearings of contemplation, Constantinos Patsis presents himself as a creator with a solid mood of reconciliation. It comes to offer places and ways of co-habitation to all those heterogeneous features that demarcate a path of inherent contradictions.

As is the case with every attempt at introspection, Constantinos Patsis approaches that point of personal retrospection with mixed feelings of melancholy and contemplation. In Constantinos Patsis’ artworks lurks a mournful aura even when the gaze is trapped in bursts of light.

The vertical streaks that define the interminable horizon of each project, lines that start from scratch and head to infinity, enclose as grains or wounds, the numerous mortal creatures that flicker. It's like a constant reminder of a perpetual regression.

The references to the illusory geometry of Op art and the vivid, dense, monochromatic motifs, on the edge of an optical delirium, coexist with origins from lakes of emotional truce.

These "attitudes" invite the long avenues of childhood and adolescent daydreaming, along with all the badges, the escutcheons and the medals of a gradual adulthood. Associative recalls of scenes from real life or from daydreaming, stand out and assert position. As leitmotif, Constantinos Patsis’ Angels reminiscent of the art of cemeteries, they become winged, sexless shadows on a verge of perpetual twilight.

Their forms are traced through the membranes of memory but the element that is present is the constant attraction-repulsion against the persistent ambiguity of matter and spirit, masculine and feminine, protection and threat, light and darkness.

They provoke the need of beauty, exacerbating it to a point of anguish. The Angels of Constantinos Patsis’ artworks, as enduring reminders of mortality and immortality, provoke the questions of futility.

Skulls appear parenthetically, as fragments of a libation in the ritual of the obsessed Vanitas, birds bring back the sense of the elusive, shadows the impression of a memory and a presence.

In all of his works, Constantinos Patsis organizes niches and chat counters. He expands networks, suggestive or symbolic. He invites Joseph Beuys, shatters certainties and issues into a landscape with loot from the history of art.

He reoccupies plundered cities which are now free from darkened galleries. He restores a sense of bliss, and with an almost impulsive attitude, he mixes his materials, inks, pencils, crayons, and redesigns in an alloy of contemplation and groan, a new field for rebooting. If one can give a sense of Constantinos Patsis’ art, it could be the "Omnia vincit Amor!" but with the awareness of the rough route.

This hybrid autobiographical mural, full of faces, totems, shadows and ephemeral flashes, converges, ultimately, to the freedom of self-determination and the belief that "Paradise Lost" is nothing more than the version of a reflection in the mirror.