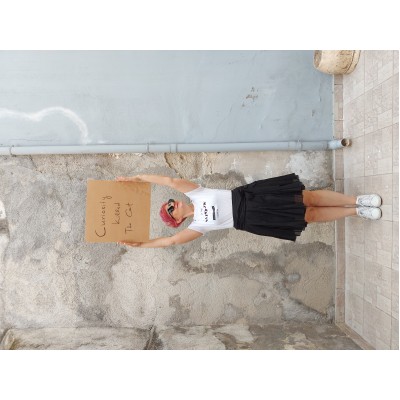 This year, for the Cube Gallery, the art project "Curiosity Killed The Cat" will definitely not have the role of a summer epilogue. It will be the prologue of all the collaborations that will follow, because after many months of social distancing and closure, due to the global pandemic, we continue the program of our exhibitions, with great appetite and even greater joy, walking creatively in the field of contemporary art. Although art, as its people unanimously accept, is the one that suffers first and recovers last in times of crisis, this does not seem to be the case for all of us who worked together to make it happen, since through it we want to communicate creativity, the optimism and impatience that it possessed us throughout the time we had to wait until its presentation. And of course, in this case, curiosity certainly did not kill the cat!
Liana Zoza, curator of the project Curiosity Killed The Cat, writes: “The title of the art project is directly related to the English idiomatic expression that we first encounter in 16th century England and in fact to two contemporary playwrights. The first is Ben Jonson and the theatrical comedy Every Man in His Humour, in 1958, with the phrase "Helter skelter, hang sorrow, care'll kill a Cat, up-tails all, and a Louse for the Hangman.". A little later, in 1959, he appeared in the well-known play Much Ado About No, by William Shakespeare, as "What, courage man! what though care killed a cat, thou hast mettle enough in thee to kill care." The only difference is in the original word care, used to mean excessive concern for something and in the curiosity that came and replaced it in the 17th century, with the first references being made to an Irish newspaper.
In art, as in science, we need the “curiosity” that is the driving force of research and creation. If the artist is not possessed by the desire to experiment in new fields in his work, he does not evolve and at some point he probably stops creating. In the greatness of art, curiosity meets imagination and leads to creation. Having in mind the game and the adventure that arises through this expression and not necessarily its original metaphor, to the works of the artists participating in the project, we decided to move artistically in streets where each of us discovers new things through his own “curiosity”. Besides, Curiosity killed the cat but satisfaction brought her back!”.