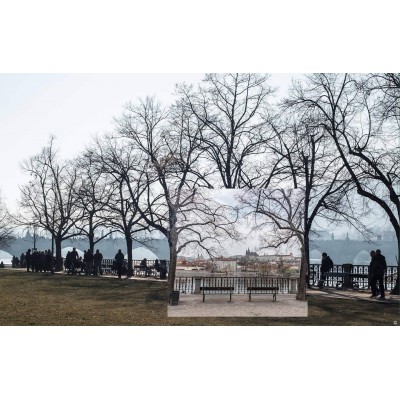 “Cities, like dreams, are made of desires and fears. Even if the thread of their discourse is secret, their rules are absurd, their perspectives deceitful, and everything conceals something else.”
― Italo Calvino, Invisible Cities
Cube Gallery, hosts as an optimistic, autumn beginning of art, the ongoing art project Invisible Cities | Continuous Cities, which is the first sequel of Invisible Cities. The project started last September at Cube Gallery, as a photographic one, with the participation of Nikos Vatopoulos, Fanis Logothetis and Xenophon Papaefthimiou, in an artistic coexistence under our common desire, for magical wanderings, in the cities of the world.
Liana Zoza, curator of the project , states: “Although the subsequent year after the project, was particularly difficult, not only for the field of art, but also for travelling, amid a global pandemic, did not prevent us from “meeting” and organizing the sequel of Invisible Cities. We had already codecided that we would like our Invisible Cities to grow, with the participation of more photographers, located in different cities around the world, who would present their own images and through their eyes the horizons would broaden for journeys of the mind.
The title Invisible Cities | Continuous Cities certainly refers to Italo Calvino and his book of the same title, without restricting or giving directions to the participants, but instead creating meeting points, in cities that one could never detect , except on some imaginary map of fantasy and memory. Like the ingenious creator of the literary Invisible Cities, who creates elaborate patterns that lead to new paths, sparking the reader’s imagination, in the same way, the coexistence of different images, leads the viewer to discover the landscapes, urban or not, transformed from real to imaginary and vice versa, as simultaneously, creating a multicultural kaleidoscope.
Believing that the peculiar perception of the image of an Invisible City, could not be imprinted merely through the photographic lens, and wanting to create an even more interesting result, through the coexistence of visual differences, we decided to involve, a street artist and a director, who approached the project in their own way.
As wandering spectators in Invisible Cities | Continuous Cities, among passers-by, lighted windows, abandoned buildings, illuminated signs and perpetual sounds, we hear the traveler Marco Polo narrate to the Mongol Emperor Kublai Khan: “Invisible Cities are a dream created in the center of those cities, where life is practically impossible”.
Participants: Bleeps, Karan Prasher, Chloe Akrithaki, Nikos Vatopoulos, Sofia Dalamagka, Ioannis Kourtalis, Fanis Logothetis, Tita Bonatsou, Nasos Nalbantis, Vasiliki Pantazi, Alex Papaioannou, Xenophon Papaefthimiou, Iannis Cheliotis