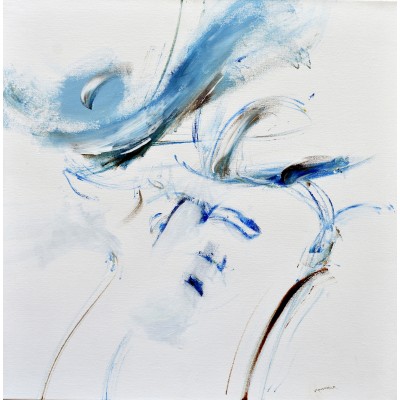 Cube Gallery, begins this year, inaugurating its collaboration with the artist Nikos Kryonidis, and hosts his solo exhibition, entitled “Traces of Escape”, in which paintings and mixed media artworks coexist in an artistic dialogue.

For Nikos Kryonidis, his art is an agonizing action - escape from the weight of his corporality and also the weight of the world that defines and specifies him, as he reports. And he continues, saying that this is a precise move, which carves scars in the face of time, minimum signs, which betray as less as possible the motion - the movement - the transit - the course, inside of it and inside of the world, with an outer destination.

The paintings of Nikos Kryonidis, with the brushstrokes that create densities and dilutions, and they swirl on the canvas, sometimes floating and sometimes chromatically compact, they invite the viewer to an optical game - voyage through the personal maps of the artist. The piercing color lines, horizontal and vertical, leave decisively their traces, the “Traces of Escape”, and they create imaginable routes from which the artist escapes from the traps of the reset.

In contrast, his mixed media artworks include within them, without leaving a way of escape, their “subjects”, human figures and figures of animals in all of the possible combinations, though without trapping them. They work more as wombs, or as warm nests, surrounding them and protecting them from the external dangers. Their motion is like they are floating in the vacuum, almost dancing, and luring the audience to a mood of internal search and investigation.

The coexistence of the form and the color on always white canvases focus on the creation of works - environments, open with a wondering mood. A wonder which leads to the white figures of the mixed media artworks of the artist, just like returning “home”, to the familiar landscape, where almost always one wants to return to. The only sure thing is that the audience is not invited to choose, but to travel through the “Traces of Escape”.