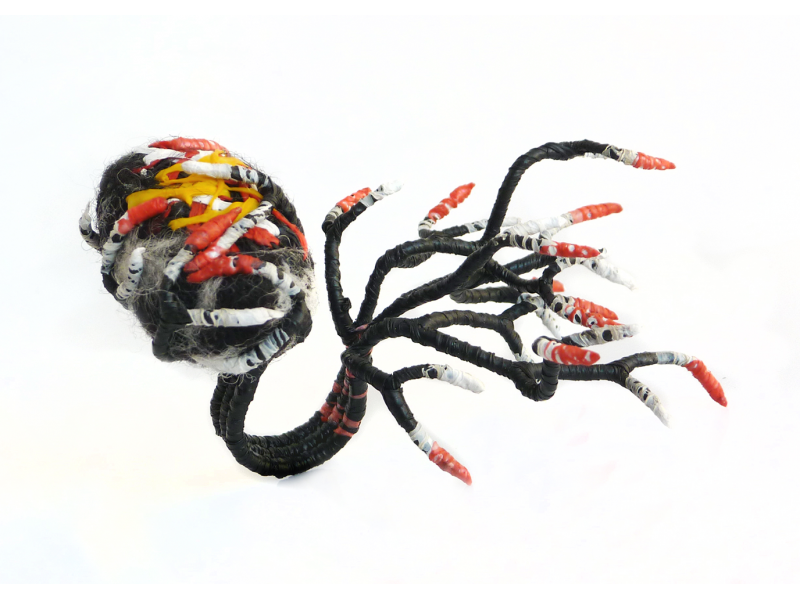 A plastic bag is the icon of our 50 years of disposable culture. It is fragile and ethereal, but at the same time, resistant and durable. I like to work with it because of its meaning and apparent insignificance. I convert it into a portable object to remind me of the nonsense, the comfort and immediacy of our societies and my own life.

This year I began making bugs.  I draw them first and when I observed carefully I realized were more similar to a kind of bacteria. And I felt identified with them, I was captivated by their colors and the shapes and the differences of the textures. They only fulfill a specific function, express my current state. I take advantage of duality of feelings they provoke: always on the edge of the ugly but sometimes surprising and I find them beautiful. They are alive and they are inside me. They accompany me and just as breathing is an unconscious action, I don't perceive them either, I only see them when something is not working properly or when I concentrate too much. With respect to the materials, they are waste, they are worthless, and I chose them antagonistic, contradictory, and of different origins, but they ended up merging into a new story, and now they are part of my life.

I am a designer from the Catholic University of Santiago de Chile. After having worked as a designer and photographer, I decided to go further into my design studies learning about jewelry in Spain. Since then I have my wokshop, and jewelry became my way of living.

In the last 6 years I have been attracted to Contemporary Jewelry. I am a member of Joya Brava and I have done workshops with Sharon Kransen, Ruudt Peters, Jorge Manilla and Jorge Castañon. Their visions of jewelry have brought me closer to a concept distinct from the one I was used to, where emotion and experimentation are the pillars that forge the work. I have been discovering freer and more authentic forms of expression in my creations.

I love making objects that will be carried by others and that will accompany them in their daily lives, generating a channel of communication through them.

I have participated in exhibitions in Chile, Spain, Germany, Poland, United States. In 2016 I was selected artist for Joya Barcelona and in 2018 I was the winner of Mydaybyday promotionship.

More from Ana Nadjar View all »