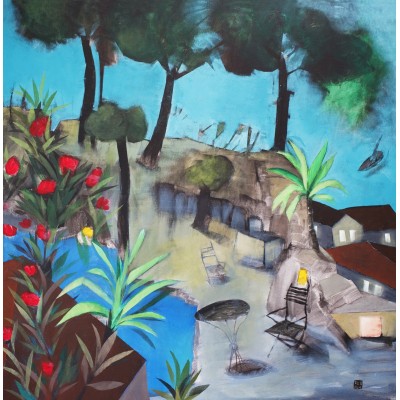 The Other Wind
Christos Kechagioglou

Cube Gallery inaugurates its collaboration with the artist Christos Kehagioglou and hosts his new work, with a Solo Show, entitled The Other Wind.

According to Christos Kechagioglou: “The other wind comes from the imaginary archipelago, where when we were kids, we built its mythology and travel through it. Or maybe it called us and travelled us, but growing old we stopped to believe in it. And yet, its wind never stopped to breathe freely inside of us, it’s this light wind we feel sometimes, that disrupts our logic and free us from everyday’s life delusions. It comes from that far, that in its breath you can still hear the language of the first human, the language of wizards, the ancient language of creation. Let’s eavesdrop its whisper through painting, that whisper which names things in a secretive way, and explores things in their deep and primordial entity”.

The Garden of happiness

Table of the night

Doc at a celebration