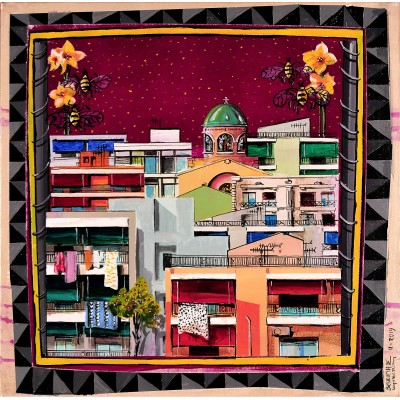 Cube Gallery, hosts the latest works of the artist Vassilis Karakatsanis, in his solo show entitled Distinct District. This exhibition is the continuity of the unity, in the same title, already presented in Athens, Cyprus, Denmark, the United Arab Emirates and the 24th Art Athina and it is Vassilis Karakatsanis’s second solo show hosted in Cube and the 93rd included in his curriculum vitae.
Distinct District is a visual approach to the Athenian landscape through personal experiences. Each painting is a true story that has played out in the suffocating, concrete environment of districts in Athens and Piraeus. A personal journal with churches as bookmarks, identifying each region. These are ‘distinct’ points, which do not depict reality but rather sum up the artist’s feelings and, through this virtual reality, presumably the viewer’s too. Furniture, objects, insects and animals stand out against the urban grid, evoking our effort for an urban way of life – at times authentic, at times not. There is asceticism and abstraction in the depiction of the urban landscape, and humorous symbolism, as the artist states his personal conclusions and acceptance of reality. An acceptance and affirmation that required a 36-year artistic journey in order to be expressed. In most of his thematic units, he deciphers the urban landscape as an internal process. Today, surrounding space is presented as a surprise, as theatrical action.

Nikos Vatopoulos and Manina Zoumboulaki have written the texts for Distinct District.

Athens, as you’ve never seen it before: living from the inside out, with inwardness and introversion, but with colours and perfumes that make it a magical Athens – a city flying above its crowds and cramped spaces.
The new series of works by Vassilis Karakatsanis titled “Distinct District” is, in the words of the painter, “an artistic approach to the Athenian landscape through personal experiences”. But it’s not just that.
Vasilis’s suddenly beautiful apartment buildings, one stuck on the other, breathe vividly through the laundry hanging out to dry, the colourful awnings and the crenellated balconies. Church domes grab the eye like bookmarks, identifying particular areas of Athens and Piraeus. And while all these pictures are real, with people moving, having sex and living behind the balcony doors; at the same time, they are reminiscent of opera sets.
A “grandmother’s” side-table; a shiny, cypress-green plastic chair (the kind gipsies sell off their trucks); a goldfish bowl; a carpet/jacket; a gown/motif, all in the foreground, and the apartment blocks behind them, breathing silently.
The deep colours and human figures take you by surprise, as do the fluffy insects, and the pets that pose, all sly innocence, as if they were in front of a photo lens.
Thirty-six years of visual arts journeys, wanderings and discoveries in the life and art of Vassilis Karakatsanis are spread out over his latest works, resting upon recognizable but disguised elements of the Athenian urban landscape.
All elements are used with inwardness, with a depth that surprises you and, in a way, keeps you in a state of astonishment. None of the works loses the artist’s sense of humour and a typical wry smile, making them realistic and wildly surrealist at the same time. This is his signature, the connective tissue that has held together Vassilis’s works over the past forty years or so... and here we come upon it at its most mature, interesting and truly beautiful moment.

The experienced gaze on the city, the gaze that scans its niches and caches; that gaze, with its reserve of experience, has claimed the right to be free. Unfettered by stereotypical perceptions of Athens, Vassilis Karakatsanis defines the extension of an active plan for the visual mapping of a broad personal fresco. It flows into Athens in a mood of equal confrontation, face to face, feeling by feeling, gesture by gesture, in order to finally exalt its own palimpsest, which carries a common body of memories and desires.

Athens, as shown in Vassilis Karakatsanis’s new works, is more the idea of an Athens than its portrayal. It is more the distillation of a fantasy than its depiction. That is why, in his attempt to access the deep body of the city, by organizing a bridge from his earlier urban ‘Carpets’, Vassilis Karakatsanis, unites fragments and becomes the architect of new co-habitations. Against the full-frontal facades of the urban apartment blocks and old houses, Vassilis Karakatsanis juxtaposes his personal stories. There is a dovetailing between the innermost and the extroverted, in a dialogue that is not always obvious. Vassilis Karakatsanis, in a mood both accepting and conciliatory towards the city-nurturer, extends his gaze, from an inner niche to an urban clearing. There, in the multiethnic, multicultural city, on an urban theatre stage, pretty much everything happens. But what seems to abate is the silence amid the crowd, and also the relics of the personal microcosms, which, like oblations, like blazons, like chiselled pendants on an urban canvas symbolize a new, as yet not fully formed relationship.

Vassilis Karakatsanis, a resident of downtown Athens, on a street that has absorbed layers and layers of generations, in a house resonating with the echoes of previous inhabitants, filled with its own, dense and polysemous world, like a cabinet of curiosities, the artist too is an observer of the city. The view from the inside out, literally and metaphorically, ensures the minimum of a totally interdependent relationship that sustains without crushing the sparks of desire.

At first reading, the urban works of Vassilis Karakatsanis bring, through their colour flashes but also through their semi-realistic rendering, waves of emotional euphoria. What emerges is an Athens (in the broader sense of the metropolitan centre, since Piraeus is also included) with revelatory tendencies, pulsating like a living organism with pores and arteries, just like the floor plan of a typical Greek block of flats. The frontal viewing of this honeycombed, multi-storey home generates feelings of intimacy, but at the same time brings with it the fine vibrations of a clandestine observation.

Yet, even though the canvas of Vassilis Karakatsanis’s houses and apartment buildings – this entire urban condenser that he offers us – appears pulsating, emphatic, gushing with all the equipment of the present time, it arrives laying claim to the viewer’s senses. Along with it comes a sense of breach, doubt or questioning. The absence of distinct faces seems to empty the urban ark of sounds.

As a sequence of banners, Vassilis Karakatsanis’s full-frontal apartment blocks are dense, almost stifling, and no doubt deeply Athenian, through all the markings and motifs of an urban legacy tucked away in the common affect. There, in these half-illuminated openings, in contrast to the intense colours of the first impression, symbols emerge as robust as trophies, originating in the painter’s personal mythology, though not only his. Domes of temples, bell towers, aeroplanes in flight, house pets in the foreground, insects and other fragments of dissimilar and largely unpredictable gaze condensers, define a polysemous world that asks to be given meaning.

There is a tendency for detachment from the paltry. The primary, mobile and ephemeral first level of the street is not of much interest; what draws the viewer’s attention is the viscera of the city, the successive rows of apartments; old houses; architectural protrusions as permanent as a roof or ephemeral as an awning; overlayings; cohabitations; sequences. The urban deposit, as it occurs and emerges through this frontal observation, appears to become autonomous and to re-establish a new relationship with the viewer.

Athens, with that broad, universal, exuberant interpretation of the city-womb, is revealed through a visual language that seeks to break stereotypical perceptions and reorganize familiar desires. Vassilis Karakatsanis’s urban landscapes are registered in the visual history of Athens as banners and totems of self-knowledge, but even more, as dictates by which to understand, accept and eventually extend and project the personal world into the urban funnel.