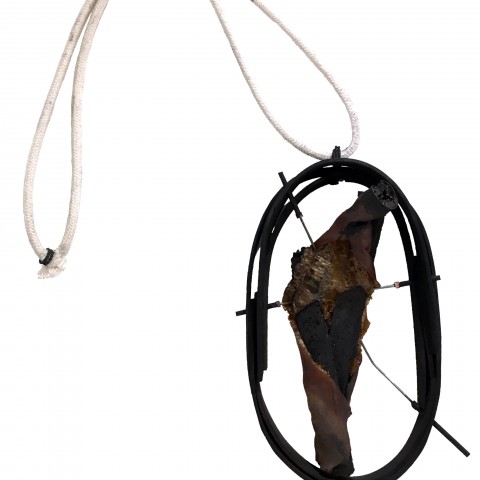 Jorge Manilla is originally from Mexico, lives and works in Belgium.

The son of a family of Mexican goldsmiths and engravers, studied visual arts at the Academy of San Carlos, in Mexico. He received a highly technical jewellery training at the Academy of Craft and Design from the Mexican Institute of Fine Arts. In 2003 He earned a Bachelor degree in sculpture at The Royal Academy of Fine Arts in Ghent And one year later he enrolled at St Lucas University College of Art and Design where he got in 2006 a Master degree in Jewellery and Silversmithing By creating jewellery Jorge Manilla investigates his environment - religion, emotions, relationships and the meaning of life. Over the last years the artist has rediscovered his love for the black colour.

To the artist black relates to something hidden, the secretive and the unknown, and as a result it creates an air of mystery. It keeps things bottled up inside, hidden from the world. His dark forms and shapes create a barrier between the meanings of the objects and the outside world. Black implies self-control and discipline, independence and a strong will. It gives an impression of authority and power.

For Manilla black is the end, but the end always implies a new beginning. When light appears, black becomes white, the color of new beginnings. Alongside his professional activities as artist, he is right now also working as researcher and doing his PhD under the title Other Bodies Design at the Royal Academy of Fine Arts in Antwerp , he also teaches and give workshops at different Art and Design universities around the world .